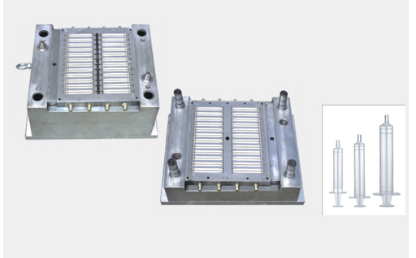 The design of the vent groove in the syringe mould is very particular, and underfilling often occurs in the trial mould production of the syringe core rod mould. Compressed air burns, high internal stress inside the product, surface flow lines and fusion lines, etc. For these phenomena, in addition to adjusting the injection moulding process first, it is also necessary to consider whether the mould gate is reasonable. When the two problems of injection moulding process and gate are eliminated; then the exhaust of the mould is the main problem, and the main way to solve this problem is to set up an exhaust groove.

1.1 The role of the vent groove of the syringe core rod mould

There are two main functions of the vent groove of the syringe core rod mould. One is to exclude the air in the mould cavity when injecting the molten material; the second is to exclude all kinds of gases generated by the material during the heating process. The more thin-walled products, the farther away from the gate, the opening of the exhaust slot is particularly important. In addition, for small parts or precision parts, we must pay attention to the opening of the exhaust groove, because in addition to avoiding surface burns and insufficient injection volume of the product, it can also eliminate various defects of the product and reduce mould pollution. So, how to exhaust the cavity? Generally speaking, if the melt is injected at the highest injection rate without leaving a focal spot on the product, it can be considered that the exhaust in the mould cavity is sufficient.

There are many ways to evacuate the mould cavity of the syringe core rod mould, but each method must ensure that: the exhaust groove is exhausted at the same time, its size should be designed to prevent the material from overflowing into the groove; secondly, it must prevent blockage. Therefore, from the inner surface of the mould cavity to the outer edge of the mould cavity, the length of the exhaust groove above 6~12mm, the groove height should be placed about 0.25-0.4mm. In addition, too many exhaust slots are harmful. Because if the clamping pressure acting on the part of the mould cavity parting surface without the exhaust groove is too large, it is easy to cause cold flow or cracking of the cavity material, which is very dangerous. In addition to venting the mould cavity on the parting surface, venting can also be achieved by providing vent grooves at the end of the flow of the pouring system and leaving gaps around the ejector rod. Because of the choice of the depth, width and location of the exhaust groove; if not appropriate, the flash burr generated will affect the appearance and accuracy of the product. Therefore, the size of the gap is limited to prevent flashing around the ejector rod. Special attention should be paid here: when exhausting parts such as gears, even the smallest flash may be undesirable. This type of parts is best exhausted in the following ways: ① thoroughly remove the gas in the flow channel; ② use silicon carbide abrasive with a particle size of 200# to perform shot peening on the matching surface of the parting surface. In addition, the opening of the exhaust groove at the end of the flow of the pouring system mainly refers to the exhaust groove at the end of the runner, and its width should be equal to the width of the runner, and the height varies depending on the material.

1.3 The design method of the syringe core rod mould

According to many years of experience in the design of syringe core rod moulds and product trial moulds; this article briefly introduces the design of several exhaust slots. For product moulds with complex geometric shapes, the opening of the exhaust slot; it is best to determine after several trial moulds. The biggest shortcoming of the overall structure in the mould structure design is poor exhaust. There are several exhaust methods for the integral cavity core:

① Use the groove or insert of the cavity to be the part of the person;

②Using the insert joints on the side;

③Partially made into spiral shape

⑤When the exhaust is very difficult, the mosaic structure is used. If the dead corner of some moulds is not easy to open the exhaust groove, first of all, the mould should be properly changed to mosaic processing without affecting the appearance and accuracy of the product. This is not only conducive to processing Exhaust cleaning can sometimes improve the original processing difficulty and facilitate maintenance.

Yuhuan Shengjiu Mould Co., Ltd. is a professional China manufacturer and supplier of   Syringe Mould   and    Oxygen Mask Mould   . With its superb technology, these uses of medical mould are more. Welcome to consult and order: https://www.medicalmould.net/

Please log in to like, share and comment!
Categories
Read More
Games
In the months before the release
In the months before the release, work has been achieved to the staircase. Quests were completed...
By Megaomgchen Megaomgchen 2020-01-16 00:11:56 0 69
Games
Armor deformation in World of Warcraft
World of Warcraft is a role-playing game that has attracted many players, where players can start...
By Eloise Smith 2020-10-30 06:37:27 0 27
Games
Maldraxxus is the most serious place in World of Warcraft Shadowlands
World of Warcraft Shadowlands, as the next expansion of World of Warcraft, is about to go live....
By Eloise Smith 2020-09-28 06:23:08 0 30
Games
Effective Tips to Farming more POE Currency
Still not figure out how to farm or Buy PoE Currency ? No matter who you are, the first...
By igvault poecurrency 2020-10-29 00:14:17 0 26
Games
EVE Online refreshed two Guinness World Records
EVE Online won another world record for another battle. In the M2-XFE battle, the players'...
By Eloise Smith 2021-02-06 03:14:41 0 15